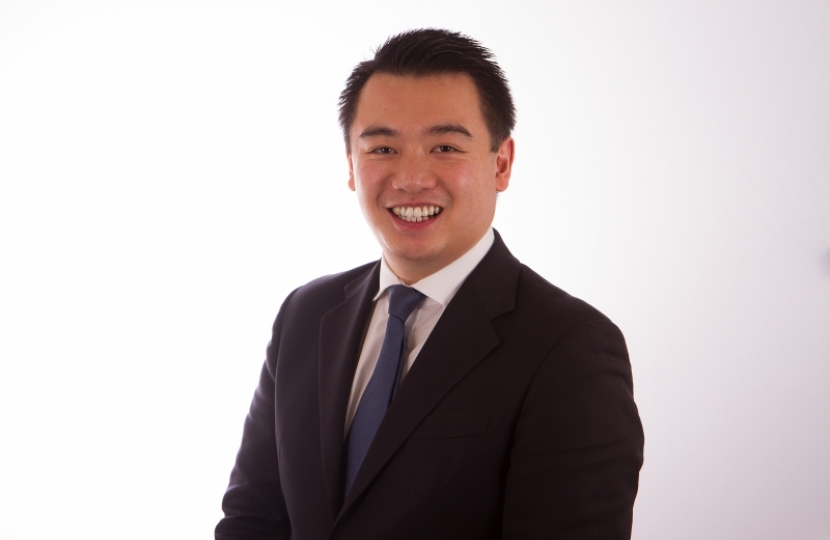 Alan was first elected on 7 May 2015 as our local MP, and re-elected on 12th December 2019 with an increased majority and the highest Conservative vote share in the constituency's history.

Alan won the Best New Conservative MP Award 2017/18 at the MP of the Year Awards in recognition of his hard work for residents all year round - and Alan will continue to serve local residents with dedication.

Working Hard for All Havant’s Residents

Alan's vision is for everyone across the Havant constituency to have a secure and prosperous future. His three local priorities are: a strong local economy, successful local schools, and vibrant local communities.

Since his selection by local residents in October 2014, Alan has been active meeting local residents, understanding local issues, and supporting local businesses, schools and community groups in every part of our diverse constituency. He is continuing this work as our hardworking local MP.

Alan is Havant’s local MP and national representative in the Westminster Parliament. You can find out more about his work and responsibilities here.

Alan’s main policy interests are the economy & business, including Britain's leadership of the Fourth Industrial Revolution; education & skills; and keeping Britain safe & successful in a changing world (focusing on defence & foreign policy, and Britain’s international economic competitiveness). These are all relevant across the Havant constituency and reflect the priorities of local residents.

Alan speaks regularly in the Chamber of the House of Commons on issues of local importance (such as local economic regeneration across Havant) and national significance (such as UK economic policy and Britain's role in the world); and plays an active role in the legislative process (for example by scrutinising and voting on legislation).

He has sat on a number of important Parliamentary committees and holds a variety of leading roles in Parliamentary groups. For example, the House of Commons Procedure Select Committee (which examined & backed the "English Votes for English Laws" policy); and the 2015 and 2016 Finance Bill Committees (passing the Government's annual Budgets).

He is a graduate of the Armed Forces Parliamentary Scheme and completed a year's "work experience" with the Royal Navy alongside his MP duties; and an alumnus of the US State Department's International Visitor Leadership Program (IVLP).

Alan was born and grew up in York, where his parents started and ran a small family business (a small high street shop) for over 20 years. He lived above the shop, and worked in it from a young age and went on to help run it. It's where he learnt his Conservative values. Alan attended local state primary and secondary schools before securing an Assisted Place (a government scholarship introduced by Margaret Thatcher for bright students from poor backgrounds) to St. Peter’s School, York after his state secondary school was earmarked for closure. This was a life changing experience. Alan became the first person in his family to attend university, reading Law at Peterhouse, Cambridge University and winning the prestigious ECS Wade Prize for Administrative Law, before completing a post-graduate law & business diploma in Oxford, where he was a runner-up for the Oxford Leadership Prize.

In his spare time, Alan enjoys spending time with his family and friends; playing & watching sports (football, tennis and hockey); films; and travelling,

You can read more about how Alan’s background shaped his political outlook and passion for public service and Alan's local campaigns across Havant as our MP.

Before his election as our local MP on 7 May 2015, Alan had a successful business and professional career, having started & run his own small business, worked as a corporate lawyer in the City of London with Clifford Chance, and helped manage his family's small business. He has also served as a non-executive director and/or investor in a range of businesses, from an advertising & marketing group and an events business to technology start-ups.

Alan has won a number of business & professional awards including from Management Today/Sky (“One to Watch” future business leader), Square Mile Magazine (Top 30 under 30) and the Guardian/Courvoisier (Future 500). He is a member of the Davos World Economic Forum’s prestigious young Global Shapers community of leaders, and a former member of business groups like the Institute of Directors and the Financial Times Non-Executive Directors’ Club. He has been awarded the Freedom of the City of London, is a Life Fellow of the Royal Society of Arts (FRSA), and Patron of the Institute of Directors' Young Directors' Forum in London.

Alan was also active with community-focused charities and good causes. He served as President & Trustee of Magic Breakfast, the UK's leading school breakfast club charity which feeds thousands of hungry children and he was selected to carry the London2012 Olympic Torch. Alan founded and served as Chairman of the British Legion's Young Professionals' Branch (a network for young supporters of the Legion) and is currently their President; served as a primary school governor for 6 years, and sat on Cambridge University's Alumni Advisory Board. He is a speaker for Speakers for Schools, a charity founded by ITV Political Editor Robert Peston that places successful business & public life leaders into state secondary schools to give careers advice and motivational talks. He is an Ambassador for One Young World, the global leadership summit for young people.

Alan joined the Conservatives in 2000 as a grassroots rank-and-file member to help William Hague’s “Save the Pound” campaign. He continued volunteering for the Party until his election as Havant’s local MP in May 2015, building a reputation for working hard, delivering results, and working collaboratively. He is a member of Party groups such as the Conservative Christian Fellowship (CCF), and a former Chairman of the Coningsby Club, an historic Conservative policy discussion group for Oxbridge Conservatives founded in 1921 whose former Chairmen include Cabinet ministers past and present such as Nigel Lawson, Michael Howard and Jeremy Hunt. Alan served on David Cameron’s Globalisation and Global Poverty Policy Group led by former Cabinet Minister Peter Lilley MP (and advised by Sir Bob Geldof) developing the Party's policies for international trade and aid for the 2010 election.

Alan’s main policy interests are the economy & business including Britain's leadership of the Fourth Industrial Revolution; education & skills and social mobility; and keeping Britain safe & successful in a changing world (focusing on defence & foreign policy, and Britain’s international economic competitiveness). These are all relevant across the Havant constituency and reflect the priorities of local residents.

Projects that Alan is currently focusing on include helping Britain become the world leader of the Fourth Industrial Revolution; and “Building the Opportunity Society”, a set of policy ideas to enhance social mobility.